Who Is The Top Actors In Tollywood

“Telugu Film Industry” Called As Tollywood, South India's Biggest film Industry Is Tollywood. The Name Tollywood Derived From Hollywood And The Meaning Of Tollywood Is “Telugu Cinema Industry”. Telugu Peoples Have 2 States Named Andhra Pradesh And Telangana, Both Of The States Have Same Language And Same Film Industry But They Separated Into Two States That's All. Chiranjeevi, Balayya, Nagarjuna, Venkatesh Are From Telugu Film Industry They Are The Vintage Actors of this industry, But Still They Have Good Fan Following And Good Films. Chiranjeevi still has a huge fan base in his own states. 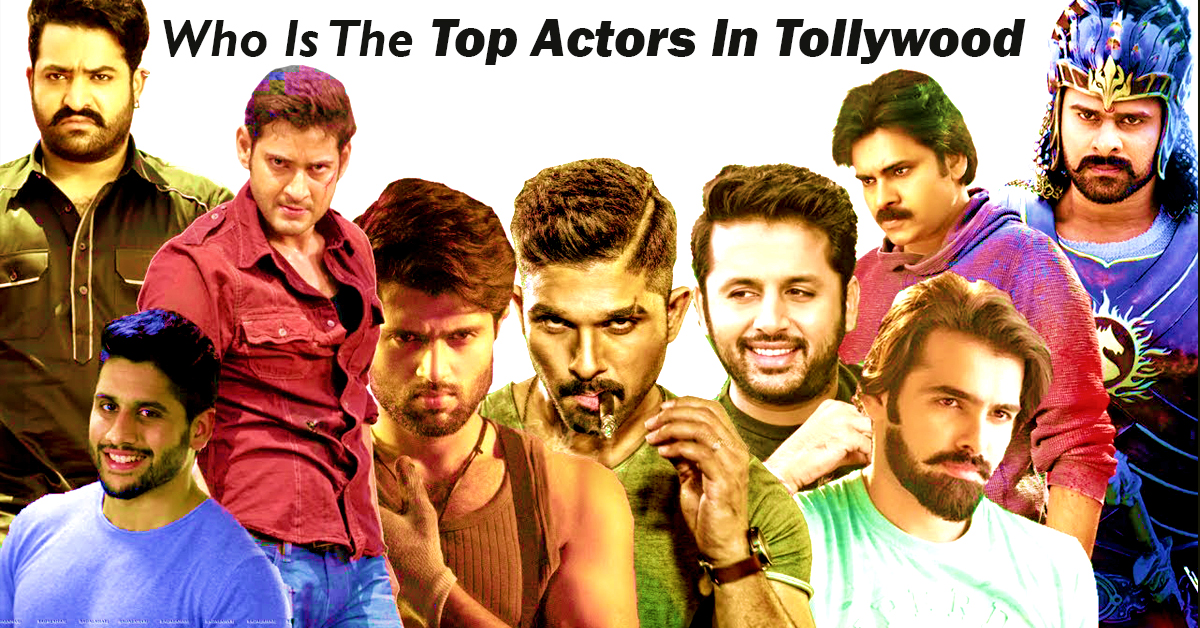 Top actor of tollywood, He has a huge fan base in his own state; the biggest fan followers are pawan kalyan fans. Most of his films collected 50+ crores in box office and he is the tollywood no 1 hero. lots of nominations and 1 film fare award he achieved in his career. acting wise, he needed to improve a lot like other actors but screen presence and dialogue delivery was outstanding that's why he got this biggest fan base. He is a political icon of Janasena party

After Pawan kalyan, Mahesh has a huge fan base in telugu states mostly girls are his fans because of his handsome, down to earth. He is called the superstar of tollywood and he achieved 5 filmfare awards. Most of his films have collected huge amounts in box office and acting wise he needs to improve a lot like Pawan kalyan but some of his movies are the best of telugu films. Mahesh babu have lots of fan followers in twitter

His fans are not youngsters because he is a vintage actor and still he has good movies and good collections in telugu films. He has good market value and his fans are 40+ aged people. He has a good box office collection but compared with Pawan kalyan, Chiranjeevi has less fans than Pawan kalyan. Vintage disco dancer of telugu cinema and verity dance steps introduced  in 90’s.

After Bahubali 1 and Bahubali 2, his life changed a lot and now he is the popular actor in India after Sharukhan. He is a pan Indian actor and his films are big budget films and biggest hyped movies. After Bahubali 1 and Bahubali 2 he got the biggest fan base from South india and North india still none of Tollywood actors can't reach at his place that's why he is called as most expensive actor of tollywood. Very good attitude and down to earth person and Allu arjun and Prabhas are best friends; upcoming Salaar and Radhe shyam movies will be change his entire career from tollywood actor to Pan Indian Actor.

The Versatile actor of Tollywood, because he does characteristic roles and challenging roles. He is the icon of telugu cinema and his latest movie is the industry hit and collected the biggest collection of tollywood. Upcoming Pushpa movie will give him a box office king because Pushpa is getting huge hype because of Allu arjun and Fahadh faasil. He have lots of fans in outside telugu states like Kerala, Tamil nadu, Karnataka, Odisha, etc. after Chiranjeevi Allu arjun will get that position because he have the potential like Chiranjeevi and Allu arjun is the best dancer in tollywood. he achieved 5 film fare awards and lots of special awards. He is the social media king of south india because lots of people are following him in social media and he has the biggest social media records.

The best actor of telugu cinema, we can call him as a real actor and doing versatile characters like allu arjun and he can do villain roles too. He acted with the legendary Mollywood actor Mohanlal and it collected 100+ crores in box office. The upcoming RRR will be a milestone of jr ntr. He is the best dancer of tollywood and he achieved 2 film fare awards. Selecting different characters like temper police roles and his screen presence and dialogue delivery is unbeatable. He has good fans and followers from his family ( senior NTR and Balayya ).

The charming actor of telugu cinema, royal characters are safe in his hands. He is called as the box office collection king of tollywood. Most of his fans are from his father Chiranjeevi and that's why he is getting good box office collections after RRR his career chart will fly like a rocket. Magadheera the first industry blockbuster of Ram charan, after Magadheera; Rangasthalam got an industry hit and now the upcoming RRR will give a special space in the film industry like Prabhas. His negative movies also collected 50+ crores at the box office. That's why he was called as Mr. Box office of tollywood, he achieved 3 film fare awards, Also he is known as the king of ceded.
VOTE FOR TOP ACTORS OF TOLLYWOOD

Who is the Tollywood King

Pawan kalyan is the king of Tollywood, because he has the most fans in Telugu states. his screen presence and dialogue delivery is the main part of his movies and he called power star of Tollywood.

considering the box office collections and fan base Pawan kalyan is the king of telugu cinema.

These are the Top Tollywood actors and top paid actors of Telugu cinema
also read :- who have more fans in tollywood

Which Actors Are Tier 2 Actors In Tollywood